The beautiful Back of Beyond

Namibia’s awe-inspiring Skeleton Coast is doubtlessly one of the most beautiful and fascinating regions of our planet, and certainly one of the remotest. The Skeleton Coast stretches along Namibia’s northern shores from Swakopmund to the boarder with Angola. The scenery is stunning: the imposing Namib Desert’s sand dunes meet rough Atlantic Ocean. A series of tragic maritime disasters lend this stretch of coast its name. Countless ships were wrecked against the coast because of the unfavourable conditions, thick fog or fierce storms. The Skeleton Coast’s tragic history has made it the world’s largest ship cemetery and many of the unfortunate sailors died of thirst in the harsh seaside desert. However, the area also has its merits. The Benguela Current carries cool water all the way up from Antarctica and blesses the region with a wealth of fish and a moderate climate. Average temperatures do not exceed 28° Celsius all year round. Despite being in the desert, the summers are pleasantly mild. The northern part of the Skeleton Coast accommodates the gigantic, 16,000 square kilometre large Skeleton Coast National Park that places the land under strict nature conservation. Intosol offers intrepid visitors the unique opportunity to visit the rugged splendour of the Skeleton Coast National Park. On a private concession, the celebrated Wilderness Safaris has erected the luxurious Skeleton Coast Camp. The Skeleton Coast Camp guests are highly privileged, access to the national park is only granted to those lodged with Wilderness Safaris. The remote location and strict conservation laws make the camp accessible by air-travel only. Approximately 300 square kilometres of the national park have been opened to the exclusive safaris the camp offers. An extraordinary experience and a chance to truly escape everyday life. The region is untamed wilderness, harsh, remote and unpopulated … but even more so, it is breathtakingly beautiful! Certainly one of the most exclusive desert experiences Namibia offers, a stay at the Skeleton Coast Camp is an experience you will forever treasure! 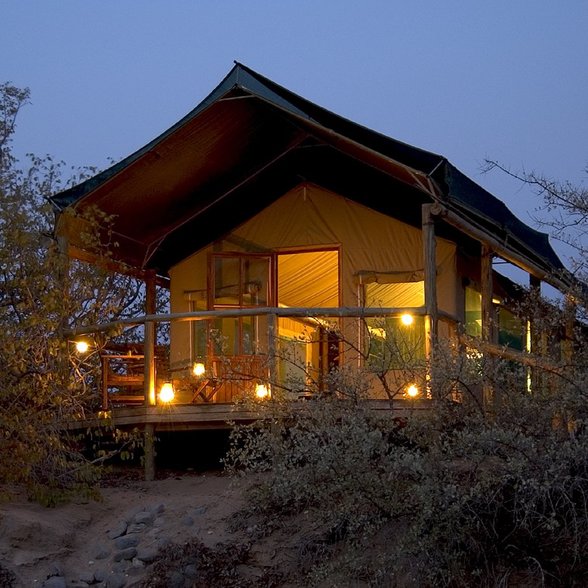